Last week I had the pleasure of talking with Steve Leonard. Steve is a former Army Officer and Senior military strategist who injects humor and leadership into everything he does. He is currently the Director of the Graduate program at the University of Kansas School of Business by day and the author of the Doctrine Man cartoons by night.

We discussed books, the value of lifelong learning, accepting risk, and the benefits of humor in our military culture.

Q. What are your personal favorite books?
A. That’s a surprisingly tough question. I can’t remember a time when I wasn’t reading, even for a day. I never go anywhere without a book, whether it’s a physical copy or a digital version on my tablet. There are some books that stand out more than others, however, and those are the ones that impart valuable life lessons, especially within the profession of arms. As a student in the School of Advanced Military Studies, we read something in the neighborhood of 310 books; of them all, one stood out: Young Men and Fire by Norman MacLean. The book recounts the experience of a group of Forest Service smokejumpers responding to a wildfire in August 1949 in Mann Gulch along the upper Missouri River in Montana. MacLean’s storytelling is nothing less than amazing as he shares the tragic events of the day, which left 12 of the 15 smokejumpers dead. The themes of the book parallel those of Mark Bowden’s Black Hawk Down, but within a much different context. In the years since, I’ve given away more copies of that book than I can remember. It’s that good.

Q. Why is reading important for the Military and/or the Nation?
A. Reading allows us to learn vicariously through the experiences and perspectives of others. One of my favorite five-dollar words is phronesis, a Greek term that translates roughly to “practical wisdom.” When we combine our own experiences with those of others gained through study, we achieve a certain state of thinking that allows us to make — as I love to remind people — qualitatively better decisions faster than your opponent. And that’s really what leading comes down to: your ability to make informed decisions when the situation dictates.

Q. Can you provide a specific example or story where reading has helped you? Either from a personal or professional perspective?
A. When I was in college, I was mentored by an English professor named Chuck Stratton, who stressed reading as a vehicle to better writing. One day in his office, he scribbled the names of a number of well-known authors — Steinbeck, Hemingway, Asimov, Tolkien, among many others. He told me that if was serious about my writing, I needed to read the works of great writers. Over time, he said, my writing style would begin to take on some of their traits. Years later, during a brief career sabbatical writing doctrine, I had an editor tell me that my writing was very “Hemingway-esque.” Which, it turns out, isn’t necessarily a good thing for a doctrine writer. I does, however, make for great storytelling.

Q. As your job as the Program Director for Business and Organizational leadership at the University of Kansas you must come across a wide variety of students. Do you see a difference between those that are lifelong learners (readers) and those who have not read since college?

A. Not to put too fine a point on it, but people who stop developing themselves personally and professionally after college might as well tattoo it on their foreheads. Everyone else sees it, whether they realize it or not. I once worked with someone who had a difficult time giving guidance to subordinates, and leaned on others to do it for him. I gave him a copy of Defeat Into Victory, in which Slim goes to great lengths to extol the virtues of a leader personally writing their own guidance and intent. My colleague wasn’t interested — the only books he’d read since college were Western novels and he wasn’t about to start reading anything else. Lifelong learners stand out from the crowd in the same way as those who abhor learning.

Q. You have talked quite a bit about the benefits of accepting risk. This is a touchy subject as many commanders see the value of risk, but are more fearful of a negative outcome. Would you have a story that could show the value of smartly accepting risk?
A. My perspective on risk is shaped by my experiences before commissioning. I was a firefighter through much of my college years, a profession that relies on personal courage and risk. As my old Chief used to say, “The fire won’t go out while you’re standing here looking at it.” I learned early on to take calculated risks, and not to shy away from potentially negative outcomes. Putting that in a military context, one of the core principles of our doctrine is the spirit of the offense — to seize, retain, and exploit the initiative. Without taking risk, that’s impossible. To quote myself, “Risk is a potent catalyst that fuels opportunity.” It sounds trite, but it’s essential to the offensive mindset: risk opens the door to opportunities that allow you to gain the initiative. You can’t shy away from risk, you have to embrace it.

Good leaders accept risk as part of the job, and most can share stories of personal risk taking. My former boss, General Dave Perkins, often talked of the risk involved in the Thunder Run to take Baghdad in 2003. It was a calculated — not prudent — risk and he knew inherently the consequences of failure. But he took the risk, anyway. We’re surrounded by stories like that, where the benefits of risk are measurable and tangible. Nothing captures this sentiment quite as well as the conclusion to Teddy Roosevelt’s “Man in the Arena” speech:

“… if he fails, at least [he] fails while daring greatly, so that his place shall never be with those cold and timid souls who neither know victory nor defeat.”

Q. As part of the Military Writers Guild you are an advocate for the value of writing. Can you speak to a Junior Officer who does not write because they feel unqualified and feel they do not have anything to say?
A. For most of us, writing is a means to cast a legacy that will live beyond you. It’s a way to share your knowledge and experience with others. It’s how we tell our story. We’re not all going to be SEALs, and we won’t all get to kill bin Laden. But we do have stories to tell. Maybe it’s someone else’s story, but you can still share it. And you should.
If you really care about leading, and you truly want to make a difference, then you should be writing. If you don’t, and you aren’t, then you have no one else to blame when your story is lost to time.

Q. I can’t leave without asking about your Doctrine Man cartoons. What value do they add beyond simple humor and lampooning? What value does humor have in an intrinsically serious organization such as the Military?
A. I attended the “Lighten up, Francis!” school of leadership. I learned early on to never take myself too seriously, to maintain a sense of humor in all things. Along the way, I was told by people that if I didn’t learn to take myself more seriously, I’d never make major, lieutenant colonel, or colonel. Give me a break. Let’s face it, if you’re going to commit to a career in this business, you need to have a sense of humor. We can all point to those who don’t, and they tend to be miserable human beings. Don’t be “that guy.” Be the person who can laugh at themselves and the world around them. Over the course of my career, I saw a lot of interesting things that lend themselves to great humorous storytelling. Along the way, I also experienced a lot of frustrating situations that also lend themselves to humorous storytelling. When I make public appearances, I weave those stories into the narrative of the event — it helps to keep things light while sharing something something everyone can understand and relate. The evolution of Doctrine Man was an almost cathartic release of those frustrating situations; most of the cartoons are drawn directly from a “real life” event, as hard as that may be to believe. In the same vein as storytelling, the cartoons usually convey a situation to which most people can relate, a lesson we all inherently understand, or just some ridiculous situation we’ve all experienced.

Q. Any final words?
A. The advice I try to leave people with that relates to exactly what you’re trying to do with DODReads: “Reading is fundamental; so is laughing.” 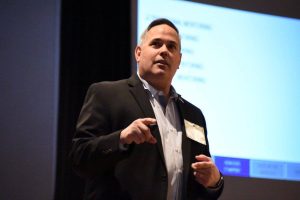 Steve Leonard joined the KU School of Business as the Director of the graduate program in Business and Organizational Leadership following a 28-year career in the U.S. Army. He is a former senior military strategist and the creative force behind the defense microblog, Doctrine Man!! A career writer and speaker with a passion for developing and mentoring the next generation of thought leaders. He is the author of five books, numerous professional articles, countless blog posts, and is a prolific military cartoonist.

No Better Friend, No Worse Enemy: The Life of General James Mattis

One thought on “Interview with Steve Leonard aka “Doctrine Man””

The Guide to Naval Awards + 55 Examples

And more at the Officers Toolkit

I started DODReads in 2017 and have spent hundreds of hours and thousands of dollars each month to keep the site going. It has remained free of charge and alive thanks to patronage from readers and their willingness contribute. If this site has enriched your own life, made you a better thinker and military leader please consider aiding its sustenance with a one-time or loyal donation. Your support makes all the difference. Thanks - John Laney

How is your command library looking?

Reach out today if you are interested in ordering the books on the  latest Army / Navy/ Air Force/ USCG or USMC Reading List for your command.

I can assist you with getting free books or provide a quote for a complete set of books for your Supply Officer.